The Law Enforcement Torch Run began in 1981 when Wichita, Kansas Police Chief Richard LaMunyon created the Torch Run.  He thought the Torch Run would help law enforcement be active in the community and support Special Olympics Kansas.  In 1983, Chief LaMunyon presented the program to the International Association of Chiefs of Police (IACP). They decided to endorse Torch Run and became the "Founding Law Enforcement Organization." With the IACP’s support, LETR became the movement’s largest public awareness and fundraising group for Special Olympics. 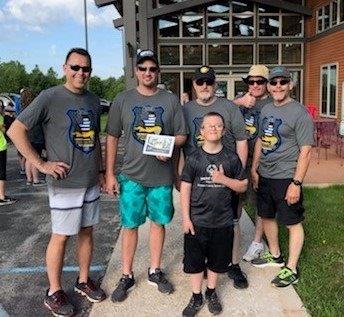 Without the support of Law Enforcement, there would be no Polar Plunge!

Plunges are a part of the year-round fundraising program called the Law Enforcement Torch Run, through which law enforcement personnel across the state raise funds and awareness for Special Olympics Wisconsin.

These dedicated men and women are the energy and effort behind many of our events and programs. Be sure to give them a big ol’ Plunge THANK YOU when you see them at our events. We couldn’t do it without them!